The US leg of the 2014 “High Hopes” tour starts this Sunday, April 6, in Dallas, Texas. What does Bruce (possibly) have in store?

First Free Show Since 1973
Sunday’s show in Dallas will be the first time since the 1970s that the E Street Band has performed a full set that was completely free and open to the public.

There have been past free performances that had limited public access (such as the Apollo Theater show before the Wrecking Ball tour) or performances that were open the public but were less (often much less) than a full set.

Bruce and the band performed times in the 1970s at Colleges and Universities where the tickets were free to students but not otherwise open to the general public. The last known time a show was completely free and open to the public was on September 8, 1973.

With the exciting news that this show will be streamed online, one need not look so far in the past to find the last time that happened; it was September 21, 2013, the last show of the Wrecking Ball tour, at the Rock in Rio festival in Brazil. (Hopefully Bruce won’t do a full performance of the Born in the U.S.A. album this time).

Will songs from High Hopes ever make regular appearances in the setlist?
If the South African and Australasian shows are any guide, it appears that Bruce is treating the High Hopes songs much as he did the Working on a Dream songs, showing very little faith in them when creating his setlists.

“High Hopes” (the song) will be there every night, and “Just Like Fire Would” and “The Ghost of Tom Joad” will be on most nights as well. The rest of the songs are conspicuous by their absence: “Dream Baby Dream,” “Frankie Fell in Love” and “Hunter of Invisible Game” were only played once each; “This Is Your Sword” twice, and three songs from the album haven’t yet been played live this tour. Even “Heaven’s Wall” and “American Skin” were missing from several of the shows played this tour.

Then again, returning to the U.S. may give Bruce a bit more freedom to try his new material, as he may not feel obligated to play as many of his “regular” or “hit” material to crowds that haven’t had the chance to see him play as often. Further, this leg of the tour notably is playing to several markets that the Wrecking Ball tour missed, so there is the potential that those “new” songs may also make the set.


What about “album” shows?
Another factor that suggests a greater presence of new material is that Bruce should now at this point be completely finished with playing “album” shows. He is no longer playing for crowds that have had rare (or no prior) opportunities to see him in concert. There is simply no reason that he should have to resort to the gimmick that are full-album shows, particularly at the start of a tour behind a new album, and in the country where he plays the majority of his live shows.

Assuming a limited performance slot, the two most obvious choices are “Tenth Avenue Freeze-Out” and “The E Street Shuffle.” The former is what Bruce himself has described as the “story of the band” and of course has been used for two years as tribute to the members of the band no longer with us. The latter would be an appropriate choice of song to include Vini Lopez and David Sancious; indeed, Lopez played drums on the song at a show in September 2012.

A final consideration on the band’s song choices is that this may be the one time that the members of the band are given the opportunity to choose the songs played, rather than Bruce himself. In an ideal world, the band would be able to play each member’s signature song (“Racing in the Street” for Roy, “Two Hearts” for Steve, “My Love Will Not Let You Down” for Max, and so on) but time constraints would clearly not allow such a long set.

It further seems unlikely that Bruce would have just Jake on saxophone (rather than the entire horn section). Given that the event falls in the middle of the tour, it is more likely that the current incarnation of the band will be on stage in its entirety.  Including, of course, Steve Van Zandt or Patti Scialfa, in what could be their only time on stage with the band this spring.

As evidenced by those ten shows in 2013, Steve’s absence is unlikely to affect the setlist choices, as Bruce played songs during those shows from almost every one of his albums.  The one possible exception is the song “Two Hearts.”  This was the song that Bruce played every time Steve guested on the Born in the U.S.A. tour, and was the song that was played every night on the Reunion tour, when Steve returned to the band.  It was absent in Australia in 2013, and returned to the set in Oslo, on Steve’s first night back.  It’s never been played by Bruce and the E Street Band without Steve on stage, so if it’s that one song you’re hoping to hear, you might be out of luck.

A reasonable analysis of Steve’s role in the modern E Street Band would indicate that his trademark vocals may be missed even more than his guitar playing.  Nils was called on by Bruce, in a manner similar to the Born in the U.S.A. tour, to join in on harmony vocals in Steve’s place but there is still going to be a clear difference.  Steve’s guitar parts, by contrast, were ably covered by Nils and Tom Morello in 2013.  Steve’s solos on more recent material such as “Living in the Future,” “Easy Money” or “Gypsy Biker” would probably require some practice to get right, although the issue is mostly moot, as Bruce regrettably seems to have little interest in playing those songs.


Patti Scialfa
Patti hasn’t played a full show with the E Street Band since September of 2012, and the number of shows she plays goes down on each successive tour.  She has, however, usually been present for the first US leg of a tour, so there is reason to hope that she may be able to make it more than just the Rock and Roll Hall of Fame induction.  She obviously will be missing the Nashville show, given the announcement that she’ll be performing at Sting and Trudie Styler’s Rainforest Benefit show that same night.

In the past, Patti’s absence has made it less likely that songs from Tunnel of Love or the song “Human Touch” would be played.  Recently though, Bruce has been relying on Soozie to cover Patti’s vocal parts on those songs, so performances of them are fortunately not completely precluded.


American Beauty
It is unprecedented for Bruce to release new original material while in the middle of a tour (excepting, obviously, the times when a tour started a few days prior to the release of the album it was supporting). Record Store Day is Saturday, April 19, and the band will be performing in Charlotte that night. Here’s hoping that Bruce chooses to debut one (or more) of the new songs from American Beauty at that show.

There is no need to wait for Charlotte, of course.  Bruce does have a long history of playing new songs live before they are released on an album (such as “Point Blank” in 1978, “Seeds” in 1985 or “American Skin (41 Shots)” in 2000).  It wouldn’t be a surprise if he tried some of the American Beauty songs as early as opening night in Cincinnati.


“Local” Cover Songs
There was a great deal of publicity regarding Bruce’s choices of “local” cover songs in South Africa and Australia, and they were obvious highlights of the tour. That said, it seems unlikely to continue in the US, and those hoping for a cover song from different band from Tampa or Raleigh or Columbus are likely to go away disappointed. The nature of the Southern Hemisphere leg, where the band did not fly home after each show and were on an extended tour together naturally lent itself to more time for pre-show practice and more time to come up with interesting ideas for each show.


Miscellaneous
Will the shows continue to be available as official downloads?
There’s no reason why they shouldn’t.

Will there be more shows?
Bruce’s tours are big business and there’s never before been a tour where he’s skipped his biggest markets in the US (for example, New York). At some point in the foreseeable future, he will be playing there again.

But when exactly?
Your guess is as good as mine.

Is this the tour where “Waiting on a Sunny Day” finally gets a rest?
It just might be. In a positive trend, it was absent from 5 of the 13 Australia/New Zealand shows.

What other live staples might get a well-deserved rest?
Hopefully “Dancing in the Dark” will take a break from the show for a while. It’s an intriguing possibility with the tour returning to a “familiar” market; Bruce may not feel compelled to play it for fans overseas that are seeing him for the first time.

Will the Tenth Avenue Freeze-Out tribute continue?
It was present in Australia in 2014, after having already been done there in 2013. It’s possible, but unlikely that it will be left out.

Will Bruce still be taking lots of signs from the audience?
I wish he’d tamp down on this trend. He could easily make an announcement through his website (or his newfound social media presence!) telling people that he’s not doing that this time around.

If he does still want to take signs, I do have a suggestion or two: 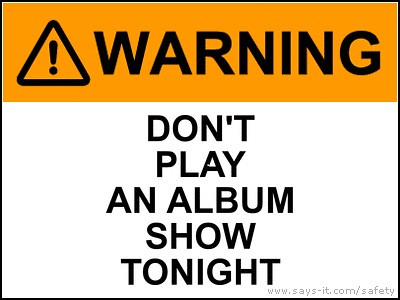 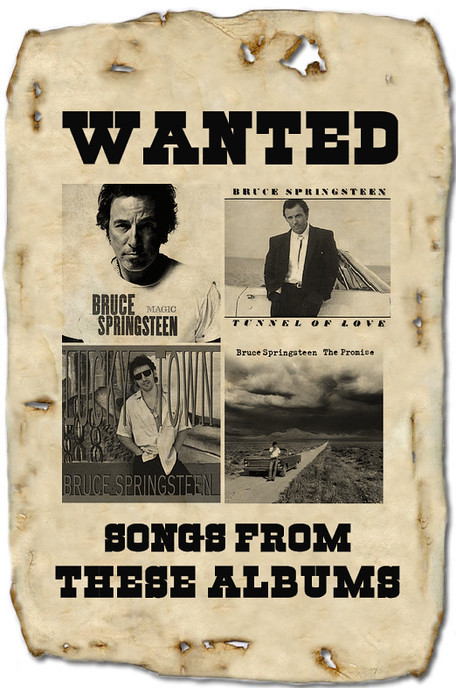 Sites I Contribute To